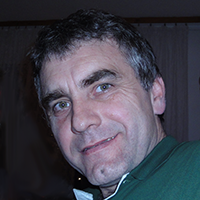 In software business since 1985, designed a large number of successful solutions for various needs and customers. Last decade spend writing mobile applications, focusing on Android and iOS platforms lately. Besides creating mobile software for clients that seen more that three millions of downloads in 2011 alone, Pavel is creator of Android programming framework ObjectForms (http://www.objectforms.com) which is his contribution to eradicate chevronitis disease.

Pavel had various speaking experiences in the past, highlighted by the participation at the keynote of Sun Tech Days in Prague in 2002 or Nokia Developers Conference in Munich, but he has taken the Android conference scene by storm in 2010/2011. Effective Android programming was a fundamental topic, connecting talks given at Devoxx 2010, droidcon Berlin, Android DevCamp and AppParade in Prague, Londroid Meetup among others in 2011.

The pivotal point of this presentation is how to code on Android in effective way. If you love programming in Java and have concerns that this language is somewhat second-class citizen to XML on Android platform, this talk is right for you. We will have a look if there are any medicaments to remedy the chevronitis disease.

Presentation will cover problematic areas such as disparity that Java is built around object-oriented principles while the rest of the Android isn't and how to deal with rough edges that come from this. Another important aspect covered is how to stay "legal" and not fight the system. While some of the techniques presented won't be exactly what creators of Android had in mind, the focus is to behave correctly, be reusable and extensible and how to make best of the techniques Java gives us to cope with whatever shortcomings Android might have.

Presentation is based around actual, legitimate examples that might plague developer's everyday life, and the takeaway is how to cope with them in elegant, effective way to deliver better Android applications.